In 2014, I drove through Sand Hill Road pitching a profitable construction software startup with five million dollars in ARR and zero sales people. We received three generous term sheets within forty-eight hours and closed a Series A a half-day later. This post summarizes how we led sales as founders in the early stages of PlanGrid and shares tips that can be applied in this tough economic climate.

It is important to note that we built an easy-to-use product that solved a significant pain point. If you've already established and validated product-market fit, these tips will help you get closer to your customers and sell more effectively to them. But if you're not there yet, keep in mind that the advice I'm offering won't help you – without some semblance of product-market fit, not even the best sales leader in the world will be able to grow your company [1].

Here are five things we got right in sales:

We understood how money flowed through the companies and construction projects we were selling to.  We knew that although corporate headquarters technically had a budget for IT and software, it was already maxed out to pay for legacy solutions. Construction projects have their own independent accounting silos, so we could skip the buyers at the corporate office completely [2]. We were domain experts and had been responsible for construction budgets at our previous jobs. We knew exactly which line items we could tap into. For example, ten percent of many construction budgets was slated to “random allowances” and another ten percent to “contingencies.” We targeted our end users at the individual level, folks who have never purchased software in their lives but had jobsite buying power. Our end users regularly put $500+ charges on their credit cards for construction tools and materials to get the job done. No one would blink an eye at a $50 monthly charge for our software solution. When thinking about your customers, invest time in understanding who owns what budget and who has the power to approve purchases.

I’m borrowing from Apple here. PlanGrid was once a top-ten business app on iOS, and our software was preloaded on every demo iPad in Apple stores. We worked with Apple’s experts, who guided us in creating ten-second “wow” demo scripts to train their in-store sales reps on how to demo our software when a construction contractor, engineer or architect visited their stores. The most important thing we learned during this process was that there is a short window of time to secure someone’s attention. Don’t waste it. Everything you say and show during these few seconds needs to be high-value for your prospects or you will lose them. These ten-second scripts would become the foundation of our sales rep training program.

#3: Show up where your potential customers are.

We knew that construction folks would spend most of their waking hours on jobsites. And because they were working long hours at physical jobs, we knew they would also be hungry. We would put on hard hats and safety vests and walk straight into a construction jobsite to drop off a big box of fresh local donuts and a stack of our business cards, offering to bring better food for the whole field office team if they invited us back for a thirty-minute lunch-and-learn demo.  Another place we walked into were construction trade conferences. But in 2012, we were a poor startup with founders who weren’t even taking a salary at the time. We couldn’t afford to rent the conference booths [3]. So instead we purchased a few attendance tickets and crashed the conference. My cofounder and I would physically bump into people at the conference and ask, “Do you want to see something cool?” and proceed to demo our software. A third of these impromptu demos would result in a business card and the request for us to follow up, but that behavior can also get you removed from the event (a lesson we also learned). Crashing a conference is not for the faint of heart. It was both scary and embarrassing, but we were hustlers. Founders often have to do things that we don’t want to so the startup can survive.

When we finally earned enough money to afford renting booths at conferences, we got creative in order to secure attention. One example was Greenbuild in 2013. We commissioned a fashion student to make a dress and a suit out of blueprints, and our colleagues volunteered to wear it [4]. They walked the conference and looked like they were part of the event. People would stop and ask to take pictures with them, and in turn they would use these opportunities to demo our product.

Field marketing was one of the most important lead generation campaigns for us. By the time I stepped down as PlanGrid’s CEO in 2019, we participated and organized over 300 events a year globally.  Obviously this was all pre-pandemic, but in-person events are starting to pick back up, so get creative if you go.

#4: Get prospects into the right swim lanes.

Time is the only resource we will never get more of, so we cannot let anyone — especially not a random prospect — waste our time. The average contract value of PlanGrid in the early years was $5,000. We had a highly transactional, small-deal-size business in 2014. To protect time, it was crucial for us to identify which customers were at best $500 in ARR and which ones could grow to $100,000 in ARR. If it was a $200 deal, the prospect would get an email with a link to a demo, and maybe a ten-minute phone call at the end of month to nudge them to buy. If it was a 6-figure potential deal, three co-founders would show up at their front door. We would personally train them on new features that they suggested, listen to their feedback and offer white-glove-service bug fixes on the spot. Prioritize defining the different swim lanes for prospects, and identify the right teammates that need to talk to them and when. It’s also important that swim lanes evolve as your company grows, but don’t change so rapidly that you’re constantly developing new messaging and targets. Signals and data points obtained over time will tell you what’s working and what’s not.

#5: Always know the next steps, and ask prospects for their business.

This one is simple. After you’ve shown prospects what you have to offer, ask them directly what needs to happen for them to make a decision. More likely than not, you are their lowest priority, so make the process easy for them. Lead the customer after a meeting and tell them what next steps are. Schedule the meetings for them. Write sample emails they can forward to their colleagues. If they tell you they have all the information they need to make a decision, ask if they will buy today. What is the worst that will happen?

Selling to the enterprise is like a never-ending fist-to-fist combat — one that lasts for decades, if you are lucky. As a startup it is important to understand that the cost of selling to enterprises is high. A good frontline enterprise sales rep makes $200,000 per year on the low end, and you may not know if they are performing for you for a full year. They will also need a lot of support from departments that may not exist at your startup yet, such as business development, pre-sales, customer success, professional services, post-sales, demand generation, product and field marketing. Enterprise buyers love their red tape (for good reason) — security and compliance, SSO, RBAC, license management, on-prem support — the list could go on.  Unless you are prepared to invest in all of these products and people from Day One, founders need to get in the ring and figure out how to fight in a way that your competition cannot. An unbelievably great team and an unbelievably great product is a good start.

[1] The foundation of founder-led sales is to make sure you have a great product that solves a real pain point.  I’ve coached and advised hundreds of startups during my time as a visiting partner at YCombinator.  When founders lie to themselves it’s almost always over having product-market fit when they do not. Their product simply did not solve a big enough problem for people to care about. So a key question to ask yourself is: Does the problem you’ve chosen to solve hurt your user so badly that they’ll pay money to make it go away? Does that problem make their job suck so much that they’ll be a champion for you and convince their boss and colleagues to pay for it?

[2] Although we skipped the corporate buyer completely in the early years of PlanGrid to much success ($50M in ARR), we would build products for the same corporate buyers in the later years because they became the sole decision-maker for construction field software. Within a few years the category we created became a category that the corporate buyer cared about. It is completely possible to have a product-market fit one year, and lose it the next because the world, the market and the competition shifts over time.

[3] There are a bunch of add-ons from renting booths at conferences. You can get the smallest bare-bones booth for $5k, then rent the carpet for the booth for another $1k, and rent an electrical outlet for another $1k — and a table and tablecloth might cost another $1k.

[4] The original blueprint suit and dress in 2013 worn by my former PlanGrid teammates and good friends Alexei and Leslie. 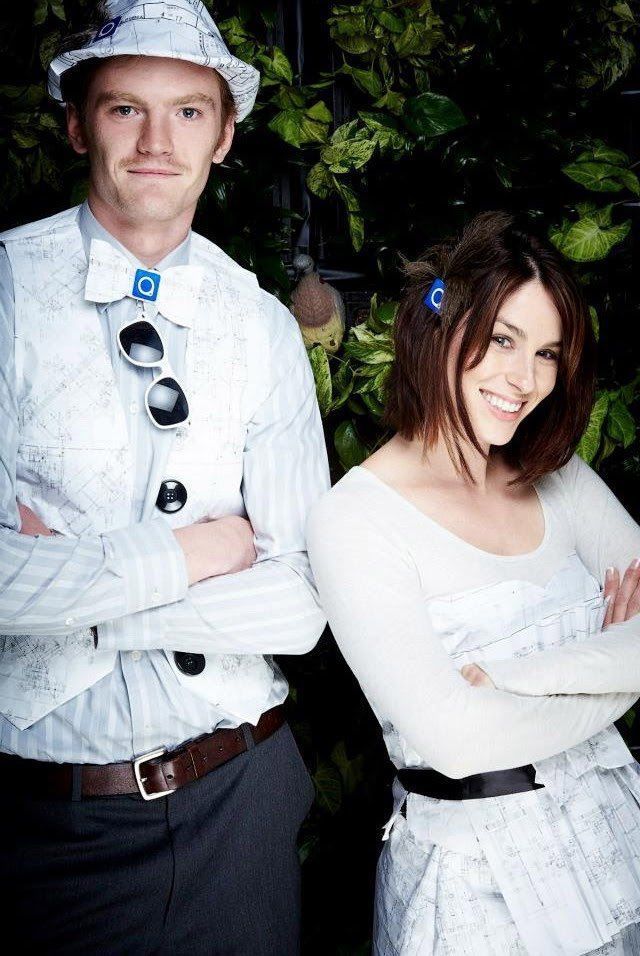